You are here: Home » News » Belhaven Bikes charity fundraising for the STV Appeal 2015!

This year the STV Appeal raised almost £3 million and we were delighted to help with the fundraising. The Appeal is committed to helping children and young people affected by poverty in Scotland. 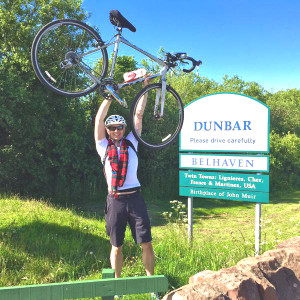 Earlier in the year STV’s weatherman Sean Batty cycled coast to coast across Scotland over four days in aid of the STV Appeal raising a total of £20,000. The 250km journey started in Tarbert and Sean arrived in Dunbar, the finishing point of his journey, Sunday 14 June.

A warm welcome awaited Sean as our customers, from the Berwick Wheelers road cycling club, kindly cycled to North Berwick to join him on the final stretch. 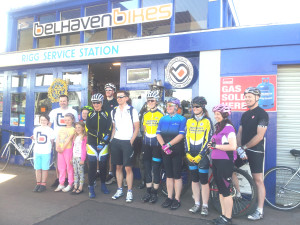 The Dunbar community excitedly came out to greet Sean when he reached our shop and he happily chatted, posed for photographs and signed autographs, as if he hadn’t just completed a mammoth cycle! Sean concluded his cycle by arriving at his final destination of the Royal Mackintosh hotel in Dunbar.

Along with the Royal Mackintosh hotel, we raised funds through donations given for bike safety checks, bike hire and a sponsored, static cycle.

In September this year, the fundraising, Chisholm family from Dunbar, took part in the cycle event Pedal for Scotland which raised £112,000 for the STV Appeal. Their Scotty dog Hamish, who led out the Scotland team at the Commonwealth Games, was along for the ride too with their team aptly named #teamhamish.

We helped Team Hamish by supplying a bike trailer which was then specially adapted for Hamish to allow him to ride in comfort and safety. 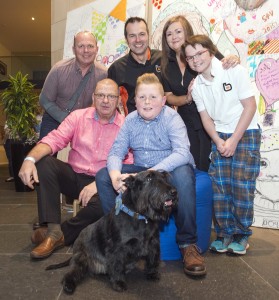 In October we were delighted to be invited, as well as the Chisholm family and Hamish, to celebrate STV Appeal’s fundraising for 2015.